Undina in London at Last!

I started reading Undina’s Looking Glass when it first appeared on the blogosphere six years ago.  I’ve long been keen to meet Undina so I was extremely happy when she wrote to say she and her Very Significant Other would be visiting London from their home in San Francisco.  If only Rusty could have come too… 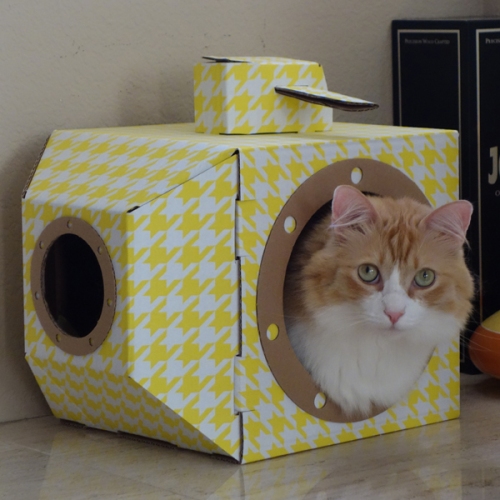 Rusty: Have submarine, will travel?

We met outside Harrods just as it opened at 11.30 am on a sunny Sunday. Undina made me feel at ease immediately and her still jet-lagged vSO very accommodatingly wandered around the store as we hit the perfume trail.

Undina doesn’t publish her photograph online but you can see below what we got up to.

First stop, the 6th floor and the rarefied atmosphere of the Salon de Parfum. Our timing was good because they had opened an additional six fragrance boutiques two weeks before, including Penhaligon’s, Armani Privé and Frederic Malle Editions de Parfums. 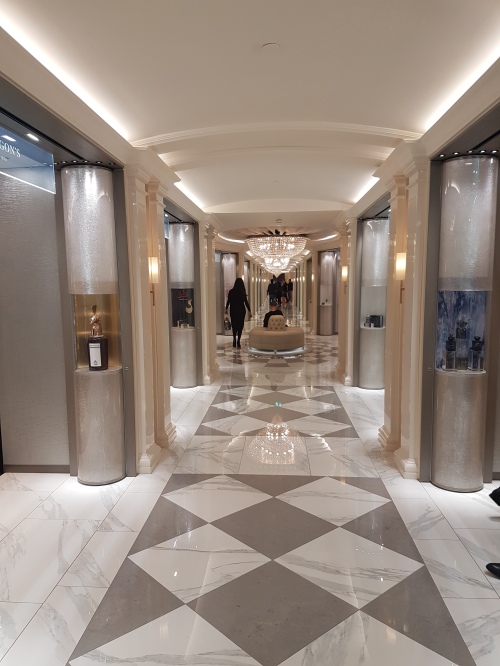 Undina had wanted to check out the MDCI Parfums line while in London and already owns Chypre Palatin. Six fragrances are stocked in the Roja Dove perfumerie (three feminines and three masculines). We liked Un Coeur en Mai the most and when Undina said it reminded her of another perfume, I was very pleased with myself for spotting it resembled Chamade. Both are spring green florals with a pollen-y feel. 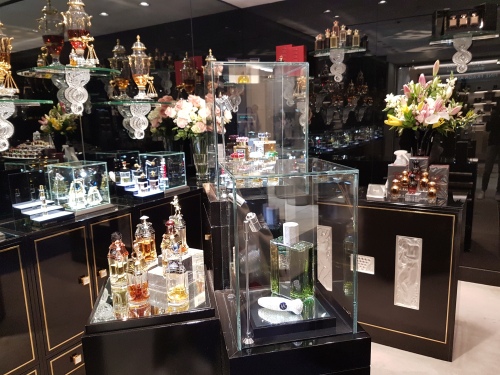 Guerlain’s  Muguet 2017 is a gorgeous lily of valley with rose, jasmine and green notes. If it were not for the sky high price I’d have happily bought a bottle. 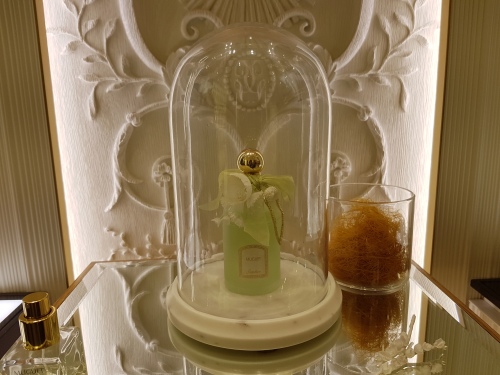 The new addition to L’Art et la Matière collection, Joyeuse Tubéreuse, surprised us by being not very tuberose-like. It’s a pretty floral bouquet with just a hint of super fresh tuberose. When the description says ‘airy’ (below), it’s not kidding. After about an hour it was extremely quiet. 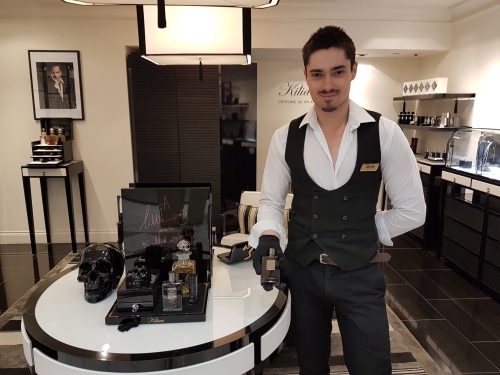 Above is the very Kilian-esque SA modelling the new Black Phantom. A boozy, woody fragrance with notes of rum, coffee, vetiver, cyanide, sugar cane and sandalwood.

Below is the Harrods exclusive Midnight in London which is £15,000 for the whole case (no more will be available).  The fragrance is a very nice mimosa-led floral which Undina liked best out of everything we tried. Oh the burden of expensive taste.

By Kilian’s Midnight in London

I was excited that Frederic Malle had come to the Salon de Parfums because since my visit to the Burlington Arcade store with Val the Cookie Queen, I’ve been a little obsessed with the line. 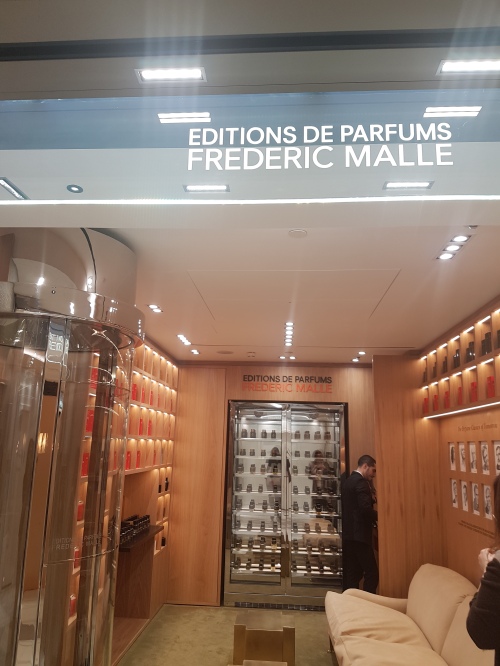 Of course I had to try out what the SA called ‘The Time Machine’. It’s a temperature controlled space for trying out fragrances in a diffused way.  Undina suggested spraying En Passant into it as it is the most fleeting. Sadly the first time if was so fleeting we could smell nothing, but on a second try we picked it up and it was lovely.

Next I tried Iris Poudre in the machine as I’m considering a full bottle purchase. This novel perfume delivery system is a bit of fun and maybe you do get a better idea than when you stick your nose onto a scent strip.

Undina disliked Superstitious on the card but loved it on me so that’s okay then.

At Armani Privé we tried the Harrods exclusive which I have sadly zero recollection of. The good news is, however, that the coveted Limited Edition lipstick iris, La Femme Bleue, is coming back and will be permanent, if not widely available.

You could go just to look at the gorgeous interiors…

Back on the ground floor we went into the Black Hall and made a bee-line for Ormonde Jayne as it’s a favourite line of Undina’s and I own a couple of their perfumes too.  We tried yet another Harrods exclusive. This one is called Amber Royal and is a very pleasant floral amber.

Montabaco is their best seller and the one the SA told me the brand is now most known for. It’s a wearable, unisex tobacco scent but is part of the pricey Four Corners collection so the 50ml is £195. 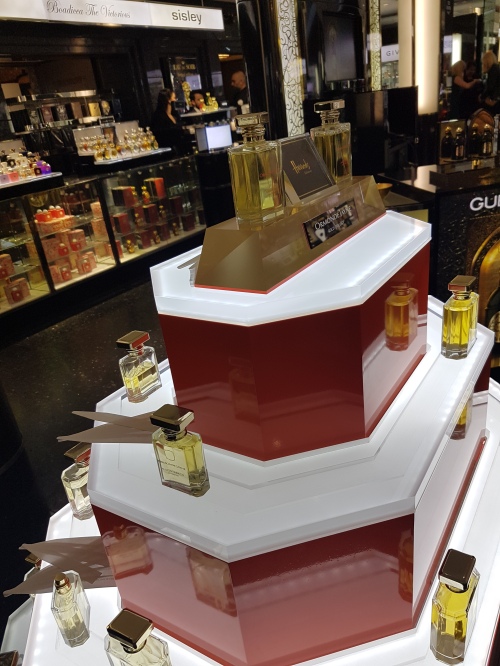 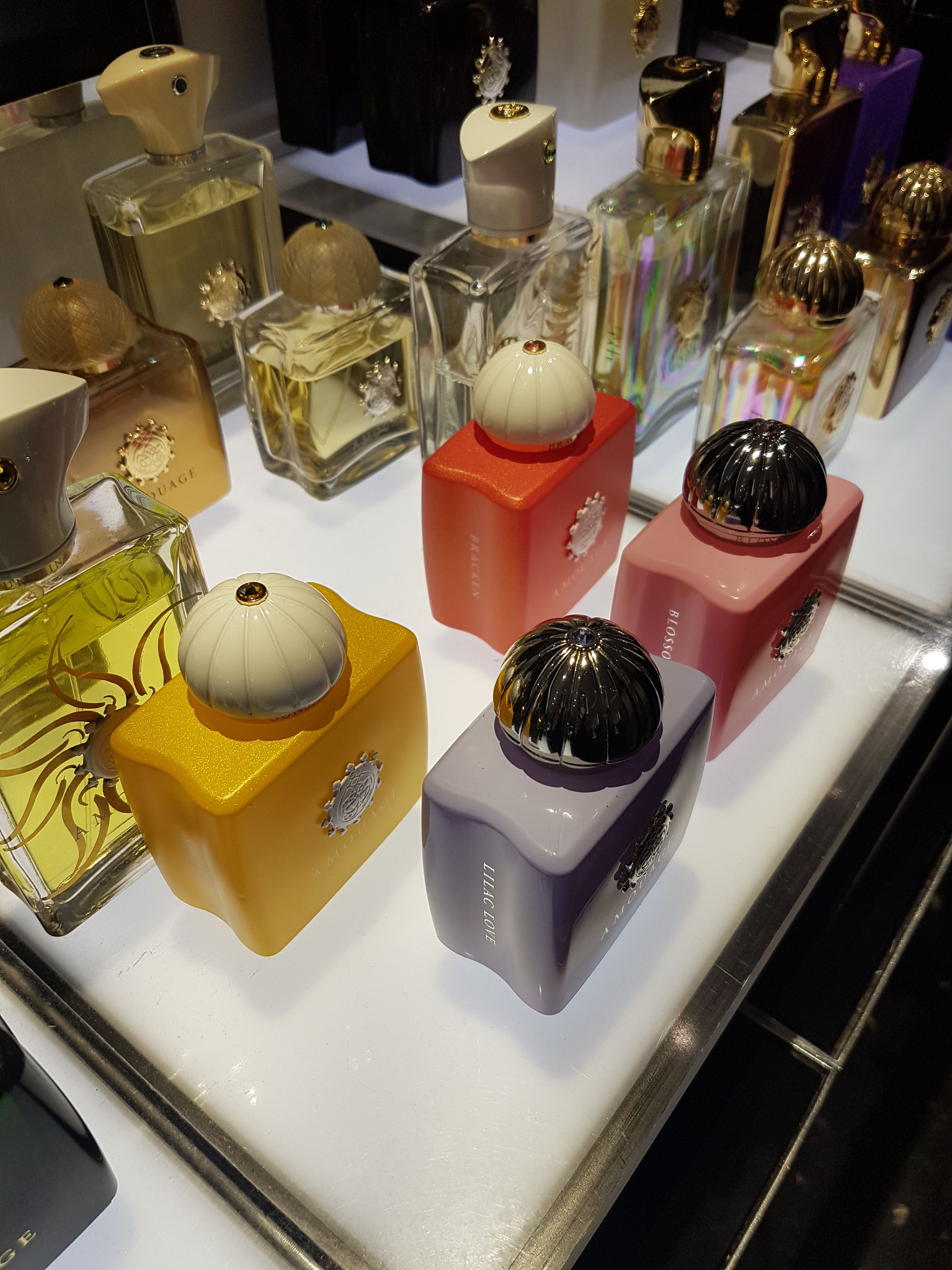 At the Amouage counter I was impressed with Bracken Woman which smells exactly as you would expect and hope. Quite a contrast with the pink bottle. The notes are wild berries, fern, lily, narcissus, chamomile, leather, patchouli, vetiver and birch.

Undina noted the placement of Bond No. 9 by the toilets…

After lunch we met Vanessa of Bonkers about Perfume at Bloom in Covent Garden. It was so lovely to see her after she couldn’t join us for Val’s visit.

Bloom looked quite a bit different. They have removed the glass cabinets which makes everything easily accessible now.  A good move. 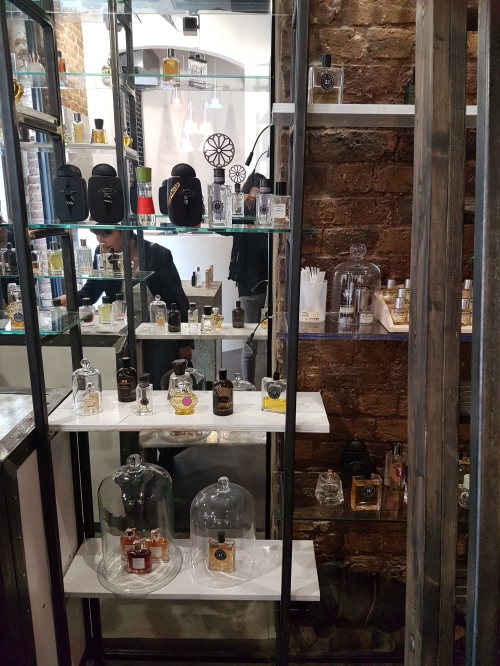 Vanessa and I enjoyed trying Hummingbird, a floral fragrance in the Zoologist line authored by Shelley Waddington of En Voyage Perfumes. My favourite is still the fur coat of Civet (also by Shelley). 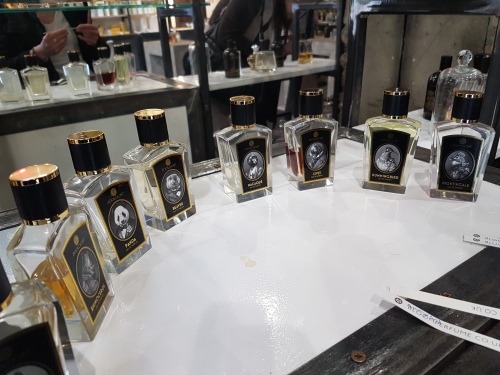 Vanessa tried quite a few from indie brand Imaginary Authors.

Undina has been trying to make her mind up as to which formulation of Mito by Vero Profumo to purchase. We all preferred the Voile in a side-by-side test.

Bloom had a tiny bit left of a sample of the forthcoming tobacco perfume from Vero, Naja, for Undina to try. I can’t wait to own a bottle.

We had tea and cake at Patisserie Valerie (it seems to be the perfumistas cafe of choice) and then I said my farewells. I would have loved to stay longer with them all but the day and my cold were catching up on me. All the same it was wonderful to spend much of the day with Undina and her v.SO and to see Vanessa again.

I look forward to seeing Undina and her v.SO again one of these days, either in London or San Franciso (it’s on the list!) 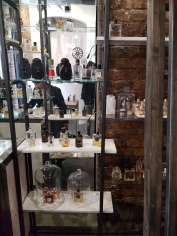 Rhinoceros, Beaver and Panda by Zoologist

Zoologist is a Canadian niche house whose creations possesses two commodities that we could do with more of in Perfumeland – novelty and wit.  The man behind this concept is Victor Wong who cleverly decided to commission indie perfumers to author each animal inspired scent. However, it should be noted that no animal products were used in any of the fragrances.

I tried the inaugural three perfumes which were launched in 2014. My interest has been piqued enough to want to try the latest additions, being the delightful sounding Hummingbird by Shelley Waddington of En Voyage Perfumes and the intriguing – not to say award winning – Bat by Ellen Covey of Olympic Orchids.

The bottles are fantastic with the illustrations being reminiscent of The Wind in the Willows.

I thought Rhinoceros would be too much of a beast for me to handle but while it’s not my usual style, I really enjoyed testing and wearing it. It’s a strange mix of booze, smoke, oud and pine which swirls across my skin and holds my attention. The subtle pine accord, along with the other aromatics, make an interesting contrast against the more  upfront combination of alcohol, tobacco, oud and leather.

The oud is the most pronounced component of Rhinoceros on me and while we are not short of oud frags to choose from, this one is particularly urbane, being nicely refined with sophisticated tobacco and leather.

The aromatics and rum recede in the base, but it remains as arid as the desert plain throughout.  It would be attractive to those who like the idea of a “gentlemen’s club” style scent with a twist.  In opposition to the tough hide of its inspiration, Rhinoceros is surprisingly smooth with a distinguished air. 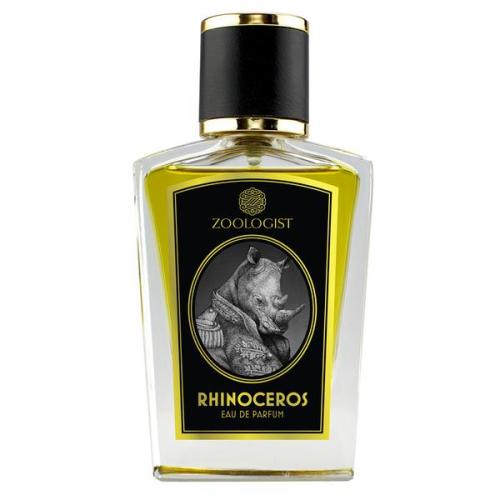 Rhinoceros was composed by Paul Kiler of PK Perfumes, as was Beaver.

*I have a sample of the original version but the website states that the formula has been modified this year with the removal of the smoke and ash notes, redesigning of the linden blossom and the addition of light leather and more musk.  A limited number of bottles of the original formula are still available.

Composed by British perfumer Chris Bartlett of Pell Wall Perfumes, this fragrance was largely inspired by the beaver’s river habitat but also uses a castoreum-style base to represent the mammal’s musk.

First we get sparkling, juicy lime bringing to mind a rushing river in bright sunlight, but this is soon undercut by a light plume of smoke and something vaguely metallic.  I don’t get the dirty facet others seem to, so I’m guessing this is yet another case where my nose is failing to pick up a certain type of musk. The muskiness I do pick up in Beaver is of the sheer, woody musk variety and flows nicely with the aquatic citrus accord.

As time wears on the watery aspect fades to a faint backwash overlaid with a cottony musk drydown.  I find it subdued – especially compared to Rhinoceros – but no doubt this wouldn’t be the case if I got the intended “beaver musk”.

Panda is a full of lush green vegetation filled with sap on the inside and dampened with rain on the outside. It makes me think of misty, verdant mountainsides and clean air. However, I’m thrown by something that verges on the medicinal.  I can best liken it to a drop of potent cleaning fluid on wet leaves.

This distracting facet calms down in the drydown when the whole scent becomes a darker shade of green, mimicking dense undergrowth.

I really admire what Victor Wong is doing with this house and all three fragrances exhibit a high level of quality and excellent longevity.

I would be very interested to read your own experience of any of the Zoologist perfumes in the comments.