I am a big proponent of qutting books you’re not enjoying because I think it’s an important factor in having a good reading life. However I know people find this hard (hey Portia). Maybe it’s a throwback from school or the way books are intellectualised that makes it feel like a failure if you ‘give up’ on a book. We don’t feel this way about turning off a TV show though and you wouldn’t force yourself to finish a film you were finding a chore so why do it with a book? Nothing kills the joy of reading faster. I DNF (Did Not Finish) quickly and often and I encourage you to do the same.

Obviously it helps that many of my ebooks are bought for 99p (as were 3 of the 5 below). Buying Kindle offers, secondhand paperbacks or borrowing via the Libby app is a good idea.

The only exception is ‘hate reading’. I hate read The Starless Star and that brought its own perverse pleasure.

The Miniaturist by Jessie Burton

“Here she is a puppet, a vessel for others to pour their speech. And it is not a man she has married, but a world.”

I read this book at the same time as Vanessa and Undina. I read the ebook, Vanesssa the paperback and Undina the audibook.

It was very much my style being an atmospheric, slightly eerie, historical fiction set in Amsterdam in the 1600s. Eighteen year-old Nella marries the nearly forty year-old merchant, Johannes Brandt, and moves to the city. Marriage is far from what she expected as she rarely sees Joanne’s, while his haughty sister, Marin, runs the house as if Nella doesn’t exist. Her only solace is the replica house Johannes buys her as a wedding present. She contacts a mysterious miniaturist to make items for the house but soon finds the striking little models of items and people turn out to be prophetic.

I read the first half at a leisurely pace but raced through the second half as we are hit with one revelation after another. It was nearly a five star book except that the mystery of the fortune-telling miniatures is never resolved plus it made no sense to me to have the epilogue at the start of the book instead of the end. Still a very good read. 4/5

The Four Agreements by MIguel Ruis 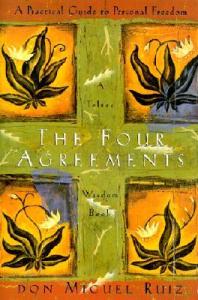 This is a modern self-help classic based on ancient Mexican Toltec wisdom. It’s a quick read and pretty simple in concept. The Four Agreements we are encouraged to make with ourselves are: Be Impeccable with your Word, Don’t Take Anything Personally, Don’t Make Assumptions and Do Your Best. All admirable and will make a real difference if you can implement them but you need to challenge your existing limiting beliefs first and that’s not so easy (probably more achievable with CBT). It did remind me of the Carlos Castenda books I read in my youth about the Toltec shaman Don Juan which was nice and I hope to remember not to take things personally more. 3.75/5

The Ten Thousands Doors of January by Alix E. Harrow

“How fitting, that the most terrifying time in my life should require me to do what I do best: escape into a book.”

This book ticked so many of my boxes. It’s a portal fantasy with a historical setting and the most gorgeous writing. January, a girl with copper coloured skin, lives with her benefactor, Mr Locke, in Vermont during the early 1900s. Her father travels the world sending back rare artefacts for Mr Locke’s collection. At age 7, January writes in her notebook and a door opens up to another world that smells of salt and cedar. At the age of 17 she finds a book called The Ten Thousand Doors and her story is then interwoven with that of Adelaide Larson who sees a door open in a field and a strange boy walk through it. The two of them spend the following decade looking for one another again. Meanwhile, January learns that Mr Locke’s archaeological society is not as harmless as it seems and she is in fact, in grave danger.

The story is beautifully told and it was great to have a mixed race heroine in a fantasy book for once. There was also a strong olfactory element which I always enjoy. Just my thing. 5/5

Towards the end of February I found out shielding was extended to 31st March, so I only felt like reading something pulpy and undemanding. Years ago, I read the Rose Gardner Mysteries by this author and they were humorous with a good slug of romance, all set in the Deep South (which I love). Cry in the Dark is similar being a spin-off featuring a side character from the original series. By this point, I had zero recollection of her or her storyline but it didn’t matter. Carly is escaping a dangerous and powerful ex, with a new identity, when her car breaks down and she has to make a stop in a backwoods Smoky Mountain town. She gets a temporary job at Max Drummond’s tavern but is attracted to his seemingly hostile brother, Wyatt. On her first night in the town she witnesses the murder of a teenage boy by a drugs gang and the police are out to nail it on her.

It was not in the least bit scary/stressful because the baddies are more like comic book characters. Truth be told, the plot was a load of twaddle and the writing is sub par. I did consider DNFing it, but sometimes it’s good to read something daft if you’re feeling fragile. 2.75/5

“I learn how to do something called a burpee, which seems to involve squatting down, throwing your legs back, and then jumping back up again. Burpees look simple, fun even, but do not be fooled. They have actually been sent from the third circle of hell to punish those of us who have committed the cardinal sin of gluttony.”

I’d previously read journalist Bryony Gordon’s mental health memoir, Mad Girl. I bought the audio book about running to listen to on my 30 minute trots around the local streets because I thought it might be motivating. Actually it’s less a book about how to run and more about how exercise can help your mental health. At age 36, 16 stone, a smoker and binge drinker, Bryony agrees to run the London Marathon for the Royals’ Heads Together charity. She goes to one of those ‘body camps’ in Ibiza that rich people go to train for the marathon and is told she has a biological age of 51. However, during one of my 30 minute stints, with some ups and downs, she goes from jogging to running 10km. Sadly I found this rather demotivating as after 2 months, I still feel like I’m about to collapse running 3.7km. Why can’t I improve?!

This is a very short, humorous book though and not intended as a guide for runners. The inclusion of the podcast she did with Prince Harry in which he opened up about his own struggles for the first time was a nice bonus. 3/5

How do you feel about giving up on books you’re not getting on with?