Hey there A Bottled Rose, It’s a Mood Scent 4 week. WOO HOO! We are looking at our Golden Oldies. This month I have tried to steer clear of my favourites and talk about things that I adore but rarely write about. Quite a lot of my fragrances are from days gone by, so you may have read me waffling on about them before. I want to keep this series as fresh and interesting as possible for you, as well as me. Golden Oldies is open to a fair bit of interpretation too. It could be things I remember from my youth or things that go back well before that. It could be a reformulated frag that historically is much more my style or a brand new reformulation of something from decades ago. I’ll try and do a bit of a cross section for you.

Obviously, these choices are subject to change, daily.

Can’t wait to read about your favourite Golden Oldies in the comments too.

As always, totally excited to be blogging with these three superstars again: Esperanza L’Esperessence, Megan Megan In Sainte Maxime and Samantha I Scent You A Day. Check theirs out too. 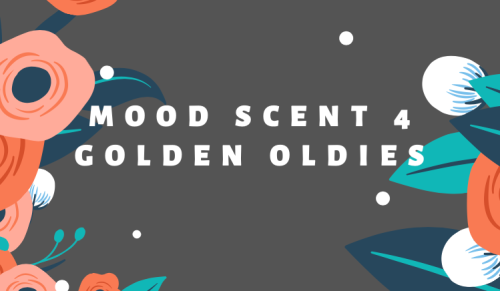 When we talk about Guerlain it always seems to be the blockbuster sirens that get the shout out. I get it. Shalimar, Mitsouko, Vol de Nuit and Samsara are by far the most reached for and thought about in my head and heart too. Thing is though there are a wealth of other fabulous beauties in the range that suit a variety of styles, moods and events. As we head into the warmer months in Australia I have been grabbing Champs Élysées and spritzing with abandon. I have the EdT, EdP, extrait and bath balls! Yeah, I kinda like it. Next year this baby will be 25! So hard to believe. Its lightly nutty mimosa and lilac is softly radiant, ending in musk & sweet creamy woodsiness. It is not a diva or a showstopper but a very pretty springtime waft of good humoured gorgeousness.

I found this baby BNIC on eBay years ago and it cost a bomb. It’s so precious to me that I rarely wear it, even though I have enough to be pretty lavish with wears. It sits in the box with all the other Christian Dior vintages and even though it rarely gets the spritz, just having it there to touch and sniff the nozzle is all the joy I need from it. It’s a very elegant floral chypre, much less assertive than CHANEL No 19 and more sensual than Niki de Saint Phalle. The narcissus is still so rich, creamy and slightly animalic, the lilac sweet and breathy and the aldehydes sparkle. Then it languidly glides into a warm mossy woods dry down, sophisticated and furry. More people should know and love this long forgotten bygone beauty.

My Rouge is in the modern Hermès bottle and it is quite different to older versions. It’s originally a 1984 fragrance reimagined and recreated in the early 2000s. This has a cleaner, more radiant 21st century feel and misses out on quite a bit of the breathy white floral skank. Really noticeable when you wear them side by side or if you are a previous fan of the older versions. Though I have both I’m choosing to talk about the new one because it’s the one I reach for most, by far. In fact, when I smelled the new one in store I liked it so much I paid full retail for it on the spot. A lovely spicy vanilla ylang with cooling, woody iris and though not mentioned I really feel like there is a hefty dose of jasmine as well. On me the rose is not nearly so prominent as the notes imply. Rouge sounds like a big tropical white floral but somehow manages to keep itself restrained and sophisticated. Much less aggressively in your face than the original.

One of my besties Scotty has been sing the praises of Paco to me for years. He brought his vintage bottle over a few years back and it immediately opened a Paco sized hole in my soul. It smells so deliciously good on him and I was constantly reminded but didn’t go hunting for it. You know how sometimes you have other things that are taking precedence? Then, about a month ago, I was innocently shopping at a local chemist that specialises in discount fragrances and I saw the familiar packaging. Didn’t even think twice, grabbed the bottle, purchased it and left the store before my brain had even gone into first gear. Looks like Puig has reformulated and rereleased Paco! Oh happy day. PLUS it was super affordable. It now comes in a black and silver tin so you can tell the diff between Vtg & New. The modern is good too, not exactly the same but a very fair imitation. Brisk citrus, lavender, sharp green woods and a slightly sweetened dry down that feels mossy but the note is unmentioned.

Here’s one of the best weird assed fragrances of all time. Annick Goutal seems to careen between this dreamy, languid, almost winsome aesthetic and hard core, super challenging, perfumista smells. We are definitely in the realm of hard core right now. This incredibly unexpected masterpiece from the house will take your breath away on first sniff. Cinnamon, pepper and lashings of immortelle! It sounds like the note list for one of the more outlandish of Mark Buxton’s releases for CdG. Honestly it smells like one of those too except even more perfectly blended, balanced and refined. My bottle is the modern iteration, much less OTT than the original. No problem here, that first run was freaking harrowing, and it lasted indefinitely. If you spritzed a scarf back in 1985 it would STILL smell like Sables. The modern, 21st century, AmorePacific iteration is infinitely more wearable and has space between thie notes so you and your associates can breathe.

WHY did they stop making this? One of the best perfumes of all time. Leather done so right it thrills me every time I spritz. A leather chypre! Come On People! Not to mention that killer bottle and the greyhound motif. Basically, the Trussardi crew were thinking “What can we make that Portia will go batshit crazy for in 30 years time, then adore it for 10 more?” Well, they sure did know. 1982 this magical elixir was released. So kind of late for the chypre genre. It was already well into its discounter age by the time I noticed it just over 10 years ago and then a couple of years ago there were testers for sale for pittance so I grabbed one but should have bought 20, I’d be rolling in money now. I don’t know if Trussardi Donna is my favourite leather but it is right up there. Eye rollingly gorgeous good stuff. 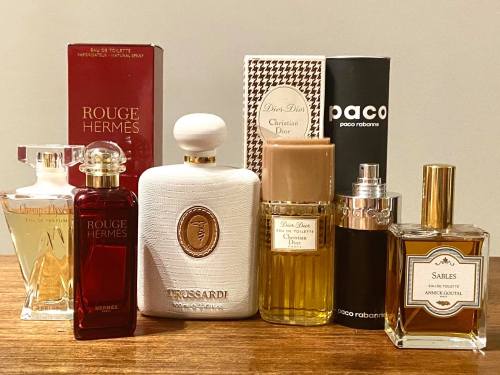 Don’t forget to go across and read the other three members of the Mood Scent 4 crew:
Esperanza L’Esperessence
Megan Megan In Sainte Maxime
Samantha I Scent You A Day.

So what are your favourite Golden Oldies, and why?
Portia xx