I’ve long heard of French perfume store, Jovoy. Their house fragrances have been available in London for some time but now they’ve opened a shop here stocking a range of mostly high-end and luxury brands.

Located on Conduit Street, off Regent Street, the space is stylishly designed and a lot bigger than you might think on first look. Last Saturday my pal Sabine and I had a good nose around. 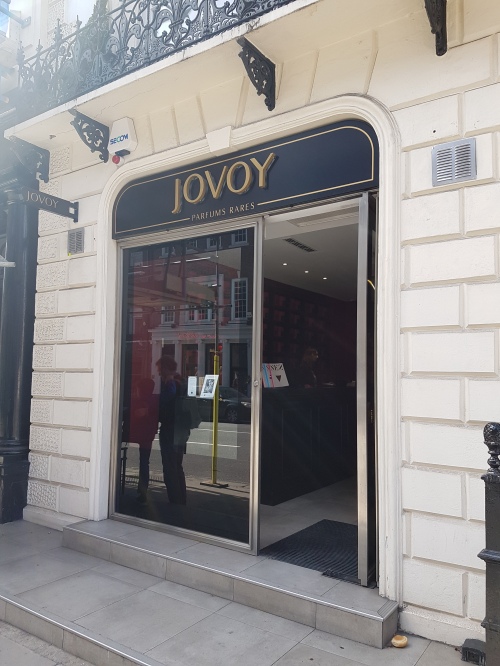 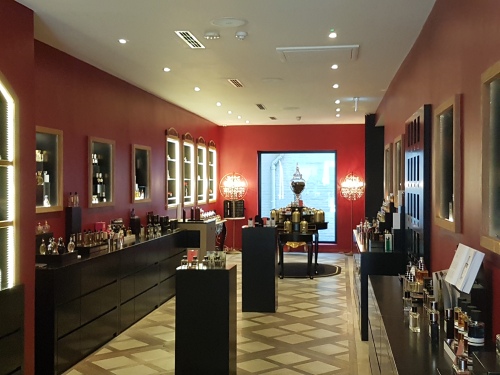 Until fairly recently it wasn’t easy to access the exquisite perfumes from Neela Vermeire Creations north of the river, so it’s nice to see them stocked here. Pichola is one of the few tuberose perfumes I can wear, but the meditative osmanthus of Rahele is still my favourite. 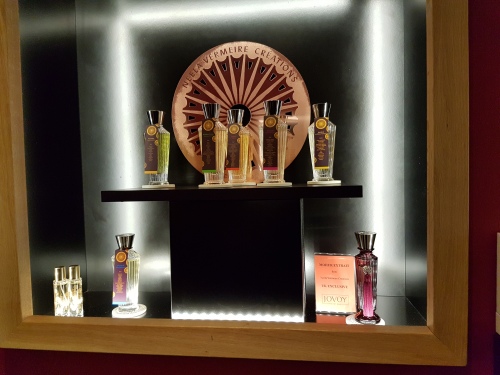 I really wanted to explore the range from The Different Company because I haven’t come across it before in the capital. The one I liked the most was After Midnight, probably not surprising because it has a prominent iris note. 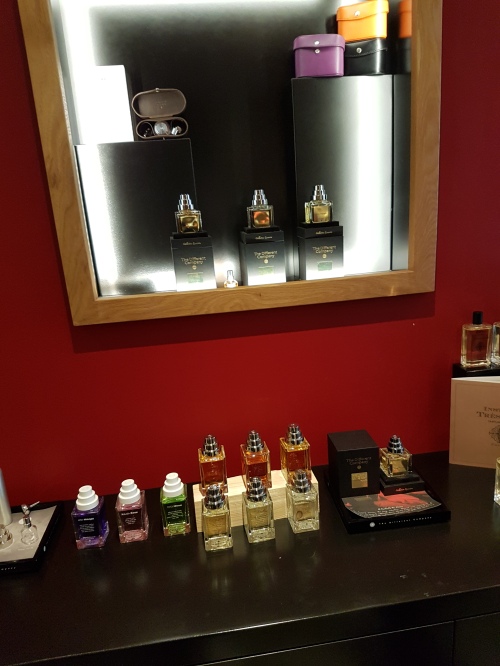 It’s hard to find a brand that does luxury better than Puredistance.

Val the Cookie Queen suggested I try Cuir Andalou by Rania J which was a wearable, not very tarry, leather, smoothed out by a undercurrent of velvety oud.

We were surprised when one of the staff told us there was more downstairs. Here we found Adedes de Venustas and Masque Milano. The latter is a niche brand that – unlike many – I think are doing something distinctive. Sabine tried Russian Tea with its mint opening and raspberry flavoured tea base.

I made a beeline for Romanza as I’ve wanted a narcissus fragrance for years and I know it’s a favourite of Claire’s, who writes the wonderful Take One Thing Off. At first the narcissus and galbanum had me getting ready to request a sample but then a forceful musk elbowed its way to the front and my high hopes were dashed. If you’ve been looking for a narcissus fragrance and you’re not sensitive to musk, you should still check it out.

I also tried L’Attesa which is a very softly spoken iris with a refined air. Extremely nice but a bit too mannered now that I’ve fallen for Iris Poudré.

After the official opening on 28th September, the self-service perfume dispenser will be in operation. You’ll be able to purchase a 10ml bottle at a flat rate and fill it with one of the eight perfumes on offer.  Four will be Jovoy perfumes while the other four will include one from Neela Vermeire Creations, one from The Different Company and a new, as yet unnamed British brand.

Real chunks of ambergris are locked away in a glass cabinet downstairs but the sales  assistant opened it up for us to a have sniff.  The largest piece had a strong whiff of the animalic but didn’t smell salty or sea-like the way I expected it to.

The small piece on the right of picture below is the oldest and whitest, having been bleached by the sun on the sea’s surface for so long. Now this stuff nearly blew my head off. To say it was skanky in the extreme is an understatement and that was just sniffing the glass cloche!

I asked if I could possibly have a sample of the fragrance that captured me the most (After Midnight) and was happy to be greeted with a positive reaction. It’s ridiculously hard to get free samples these days. Not only did they make up samples for both of us at no charge, they packaged them beautifully too.

Sabine picked up a copy of perfume magazine Nez to practice her French and we repaired to Fortnum and Mason for cake.

What a lovely way to spend an afternoon in London.

Have you visited Jovoy in France? Do you think you’d like to visit the London store? Which brand/s would you be most interested in?