Michael Edwards is the author of Fragrances of the World, the ultimate industry reference book, now in its 32nd Edition. To put it simply, he is an authority on the subject.

Published in 1996, his book Perfume Legends:French Feminine Fragrances sought to chart the evolution of French perfumery chiefly from the perfumers’ perspective and is the result of 150 in-depth interviews. In 164 pages, it takes us chronologically through 44 French perfumes starting with Jicky in 1889 and ending with Angel in 1992.

He used the following criteria for choosing the fragrances that feature in the book; firstly, that they inspired other perfume compositions, secondly, that they started a new trend and thirdly, that they have an enduring appeal which surpasses fashion.

I loved reading The Foreword which was written by Edmond Roudnitska, the great perfumer who created many of Dior’s classics including Eau Sauvage and Diorissimo as well as Rochas’s Femme. Funnily enough, he mentions that when he visited Sydney (Edwards is Australian) he was stuck by its similarity to his own Côte d’Azur.

I was particularly interested to see what Roudnitska had to say  about a favourite (if not my very favourite) perfume, “Jacques Guerlain’s most modern composition was probably Vol de Nuit which was not given the full appreciation it merited from the public or from the House.” He also states that Chanel’s best composition is not Chanel No.5 (which he feels benefited from clever marketing) but in fact “the magnificent” Bois des lles

After The Foreward there is an introduction entitled “The dawn of modern perfumery” which leads up to the creation of Fourgére Royale by Houbigant in 1882. Then we get to the perfumes… 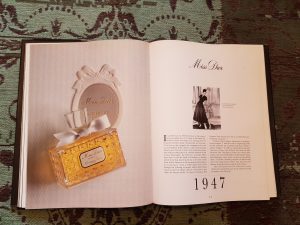 Each individual entry starts with a brief summary of the time and gives the context for how the perfume came into being. This is followed by a piece about the specific fragrance explaining how the perfume was developed, usually with quotes from the perfumer, his relatives or associates.

These aren’t reviews but offer up what are usually fascinating tales which try to get to the facts about how the perfume came about and why it became so great. The chemical components aren’t shied away from but aren’t overwhelming for the non-scientifically minded, like me. It’s a nice mix of anecdotes and technical information.

Before ending with a section about the bottle, there is a pyramid diagram detailing the “Head, Heart and Soul” accords and epithets for each. In the case of Miss Dior these are “Spicy, Flowery and Clinging”.

I really like how Michael Edwards gets to the root of the story behind the perfumes by going back to the source. Iconic fragrances are often surrounded by myths but you feel that Edwards gets to the truth wherever possible. It’s a large, beautiful, coffee table-style book but unlike most in that genre, it is full of content.  Perfume Legends really is a wealth  of insider information, facts and stories from the relevant protagonists or those closest to them.

Unfortunately it’s a spendy purchase with the hardcover currently on Amazon UK for £149.01.

Many thanks to Lila for lending me her copy.

Do you have any non-fiction books about perfume to share?