I returned from the Dominican Republic to find MJ dead.  He had overdosed the night before.  My first love, my partner of eight years, the person I had moved to Amsterdam with.

College 1978.  I was sat in the common room, listening to Spirit’s The Twelve Dreams of Doctor Sardonicus, when MJ walked through the door.  Barefoot, ripped jeans, long curly black hair, an earring, and John Lennon glasses.   It was love on the spot.  Who hears warning bells at eighteen?

I was fourteen when I went to see Stardust. It was the 1974 sequel to the film That’ll be the Day.  It follows the fictional band, the Stray Cats,  who were David Essex, Keith Moon, Paul Nicholas and Peter Duncan.  Essex, a real-life pop star, playing the rise and fall of Jim Maclaine, fictitious pop star.  Managed by Mike, played by Adam Faith.   Kind of mixture between fiction and reality.

Spellbound from the start,  I was in the film every step of the way.  The music, the clothes, the drugs, the glamour.  I was living it.   Jim Maclaine, who had become a megastar and split from his band, was being used and abused by the business; and eventually goes to live in Spain in a castle, becoming a  recluse, his manager in tow.  No one has seen him for two years,  at which point he is talked into giving a live interview, in his castle, which he absolutely does not want to do.   As he sits in front of the cameras, he starts to talk,  but makes no sense.  Publicly there was triumph but privately disintegration.  Mike realises that Jim has OD’d, calls an ambulance and goes and pulls him out of the press circus.   You see him carried out and put into the ambulance on a stretcher.  And then he dies.

I was absolutely blindsided and started to cry.  I could not stop.  I wept all the way home, and as I went into the house, my mother came running, asking what was wrong.  I kept crying.  She told me it was only a film, but it was so much more than that.  I felt that I had known Jim, and my heart was broken.  I cried for the rest of the night, a deep pain in my chest.

MJ and I spent the next nine years together, the last two of them in Amsterdam.   A couple of busts.  A shitload of fabulous music, the punk years, the club years, the festivals years.   No TV but always a good sound system.  Music day and night;  reggae, punk, hippie, psychedelic;  Stooges, Velvets, The Clash, Stones, Talking Heads, Grace Jones, the music that accompanied the slow descent into a heavier scene.  Funny stories, sad stories and some quite terrifying stories.

I had not been back in Amsterdam for 36 hours from the Dominican Republic, when I found myself on the way to the airport to meet his mother and brother. off of a plane.  I was in total shock.  It would be some time before I was able to cry, my heart so broken that the pain had not yet set in. 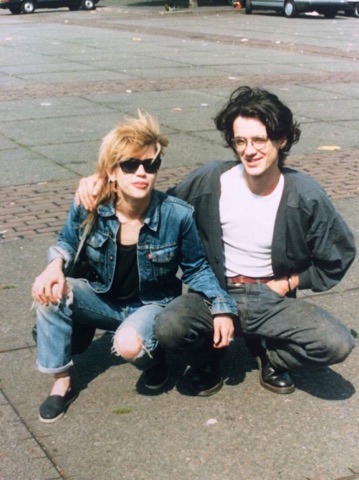