I love the whole aroma M perfumes aesthetic from the Yuzen paper used to decorate the bottles to the American indie brand’s Atelier (pictured below). 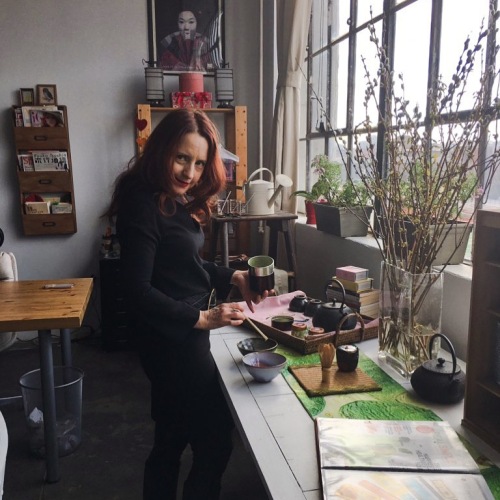 Perfumer and style maven Maria McElroy regularly posts pictures full of beauty on social media, including Japanese fine art and her cat Tama chan. When it comes to the fragrances themselves, they are equally captivating. There has to be a perfume among the varied Geisha collection for just about everyone.

Geisha Botan (botan being peony in Japanese) is the latest addition.

Maria first encountered a peony garden when she moved to Tokyo in the 1980s and sees them as a quintessentially Asian flower. The peony derived its name from Paeon, a physician to the Greek gods. For centuries the roots, bark, seeds and flowers of peonies have been used for medicinal purposes and are purported to ward off evil chi.  They have a joyous, carefree quality and are a popular motif in traditional Japanese tattoos, denoting a devil-may-care attitude.

The peonies do not allow
The rain-clouds a hundred leagues round
To approach them.
– Buson

I was predisposed to like Geisha Botan because I knew it was inspired by the uplifting, rosy scent of peonies, but they are the overarching theme rather than the whole story. It is a much more nuanced and full-bodied fragrance than I expected it to be. I was imagining a breezy and innocent scent but it possesses presence and depth right from the beginning.

I was pleasantly surprised by the mossy facet and its juxtaposition with the fresh flower works well. The peony and accentuating presence of rose, lie like a bolt of vivid pink satin over the forest floor.  The contrast between the bright, blowsy blooms and the lichen covered earth makes what could have been a pretty but simple scent, into something rich and compelling.  It mirrors Aroma M’s eclectic feel, where Japanese influences are filtered through a New York state of mind.

The composition is filled out by a substantial though airy vanilla, similar to the variety found in Geisha Vanilla Hinoki, softening the overall effect and adding comfort. If you like vanilla but tire of perfumes where it’s overpowering and overly sweet, this could be a good option for you. The base compromises musky woods with a velvety feel, as advertised in the notes.

Geisha Botan is a versatile fragrance – relaxed enough to wear during the day but also intriguing enough to wear at night. It’s a sophisticated floral vanilla, the likes of which we don’t see often enough.