The week before last, I went up Edinburgh to stay with my fab friend Davina during the Fringe Festival. I’d never visited the city before and was totally won over by it. The centre is compact enough to get around comfortably on foot and as my eloquent and observant pal Vanessa put it, Edinburgh is “uniquely characterful”. The architecture had me captivated and I felt right at home. I rarely visit a city and imagine myself living there, but I did with Edinburgh.

As for the Festival, thanks to Davina, I was lucky enough to see a great range of fascinating acts from a solo performance artist in a pub basement to a drag/circus/burlesque extravaganza in front of several thousand. I loved every minute and can see why people go back year after year. 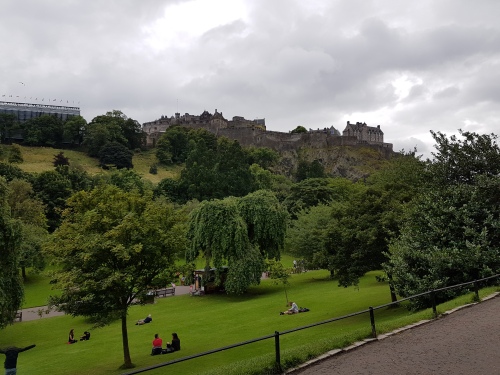 During our time wandering the city, we dropped into the Urban Reivers (“Urban Raiders”) pop-up shop on George Street which was there for the duration of the Festival. Urban Reivers is a brand-new online venture which portrays Scottish heritage in a cool and creative way. Their products include scarves, candles, cocktail boxes and perfume, which are all intended to be ideal for gifting.

Damn Rebel Bitches was created in partnership with Sarah McCartney of 4160 Tuesdays. The name comes from a book of the same name by Maggie Craig about the rebellious Jacobite women. These “daredevils in tweed” helped the rebels to flee during the 18th century Scottish uprisings, with one hiding a soldier under her large hooped skirt as the English army searched her house (women didn’t wear knickers back then, you know). Lady Nithsdale even broke her husband out of the Tower of London and conveyed him to France dressed in drag. They were hated by the English press which branded them ‘rebel bitches and damned Jacobites.’

You may expect that with a name like Damn Rebel Bitches, the EdP would be challenging but it’s actually very easy to like.  It incorporates ingredients that would have been available to the women at the time. Clary sage was used as a medicinal herb while hazelnuts were a significant part of their diet.

In Damn Rebel Bitches the blood orange is the star of the show. It starts off tart and green but quickly becomes rich and syrupy. I love this material so really enjoy how it forms the substance of this fragrance and how long it lasts.The malty aspect is there, combining really nicely with the orange. The hazelnut makes for a soft, nutty/orange gourmand base. For the record, I don’t pick up on the clary sage.

All in all, Damn Rebel Bitches has a surprisingly sunny disposition which makes it very wearable, although I should mention it is on the quiet side.

Is there a perfume that is inspired by your part of the world?